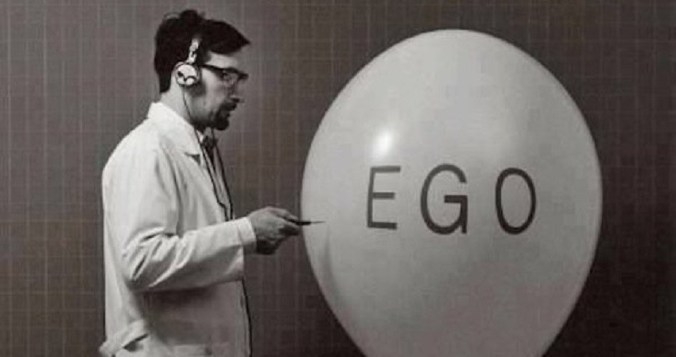 “Check your ego at the door. The ego can be the great success inhibitor. It can kill opportunities, and it can kill success.” – Dwanye “The Rock” Johnson

In the human experience, one core issue we all deal with on a constant basis is balancing our ego in our lives. Too much ego and we can risk becoming arrogant pricks which can hinder our objectives. Too little ego and we risk being timid doormats, which enables others to walk all over us. So managing that fine line is a critical and daily issue we have to deal with in. In terms of Blue Pill and Red Pill this gets taken to a higher scale because of the implications that stem from it.

The ego in reference to the Blue Pill is possibly the single largest threat to freeing men from the grasp of the Blue Pill. The reason for this is that Blue Pill men make large ego investments into “not being like other guys” or being “better men” than the jerks women complain about yet hook up with, in a twisted sense of false humility. By taking the noble high road, Blue Pill men are trying to project themselves as humble and some how morally superior, yet in reality they are feeding their ego on a sense of honor which they pride themselves on. Not only is the Blue Pill man devout in his stance, but he takes pride in it. This becomes the reinforcing agent that traps him and ties his fate to all the women that have “turned a new leaf.” He may secretly slut-shame or want to avoid the low quality women, but then once a woman turns her affections towards him he will automatically absolve her of any past sins because his ego investment in his honor system keeps him bound to the idea of being “a good guy.” Plus, if she’s showing interest and affection in him, it provides a validation for his ego investment because she must be all his hard work and sacrifice, right?

This leads to a road of misfortune as the the Blue Pill ego gets met with failure, frustration and shock when his honor system he’s been living by is not respected but actually reviled by the women he seeks. Blue Pill men have the hardest times reconciling their ego’s once their investments in them have gone bust, which is the tragic outcome of being a slave to it. Depression, substance abuse and suicide are common outlets for many Blue Pill men that have had the rug pulled from under them and facing the cold fact that their ego investments where made with a worthless currency.

For the Blue Pill man, ego is an anchor that gets heavier and heavier with each investment he makes into it. The real tragedy is that he thinks he’s building a foundation for his happiness, when is reality he is laying the bricks for his own failure.

The Red Pill ego is an ally if properly trained or a cruel slave master if undisciplined. For the those aware and versed in the Red Pill, the freedom and power that comes with it are amazing “super powers” so to speak, and many Red Pill men spend a great deal of time testing and refining these powers.  A new ego is developed and fostered from this process. Unlike the Blue Pill ego, the Red Pill ego is forged from seeing things as they are, which can be a great ally to men, especially if there is a humility from looking back on one’s Blue Pill past and seeing how much progression has been made.

The danger for the Red Pill ego is that a sense of hubris can quickly develop due to success of this new freedom. While one is certainly more successful and in a sense “better” than one’s Blue Pill self, there is a tendency to look down upon all Blue Pill men, especially since they can be a painful reminder of what one used to be like. This is where the risk of arrogance comes from for Red Pill men. This arrogance can cause Red Pill men to slip back into Blue Pill habits or find themselves in situations where they are shooting themselves in the foot by rubbing people the wrong way without any reason to.

The other side of that coin is for the Red Pill aware man who has become spiteful and bitter during his transition from Blue Pill to Red Pill. The Blue Pill ego can be powerful and lay the ground work for future sabotage in the Red Pill ego. Usually very traumatic events that leave the ego investments of the Blue Pill idealism bankrupt can form scars in man as he transitions his thinking. This impact is found on the Red Pill man who is bitter and angry. This drives his ego to be spiteful, and because this spite is sourced from a damaged ego, this new Red Pill ego is a hardened slave master that drives a man to use his Red Pill awareness to relentlessly protect his ego against any potential harm.

Whether Blue Pill or Red Pill, it’s important to keep your ego in check. Any easy way to do so is seeking out people that are in a place you want to be, whether it’s professionally, financially or Game wise. By surrounding yourself with more successful people, you are able to learn but also it keeps your ego humbled and gives you access to wisdom from the life experience of others so you manage your won ego battles.

When you’re Red Pill aware it’s critically important to keep it disciplined and always keep in mind the origin point of any action you take. Are you acting in accordance of what you want, is is your ego in the driver’s seat? If your ego is, then take caution that it’s steering you in a direction conducive to your goals. Ego’s have a tricky habit of looking out for themselves instead of ourselves.

SEX, WORDS, and SIDEWALK. Daygame stories and Game for men that think.